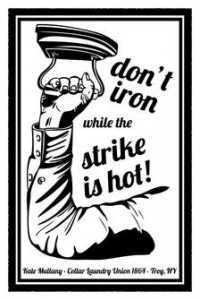 The nation’s first bona-fide all-female union was formed in Troy 150 years ago under the leadership of a young Irish immigrant, Kate Mullany, and her colleague, Esther Keegan, in reaction to low wages, 12- to 14-hour workdays and unsafe conditions in the collar factories.

Local writer and director Ruth Harvey dramatizes the story in a new musical, “Don’t Iron While the Strike is Hot.”

The play, which debuted at the Bush Auditorium in Troy in May, comes at a time when the Supreme Court has struck another blow to unions, ruling last month that certain workers who benefit from collective bargaining don’t have to pay union dues. The New York Times criticized the decision, saying it reflected “ominous antipathy toward collective bargaining and workers’ rights.” It’s all the more reason we should learn how the birth of labor union rights made the growth of the America’s middle class possible.