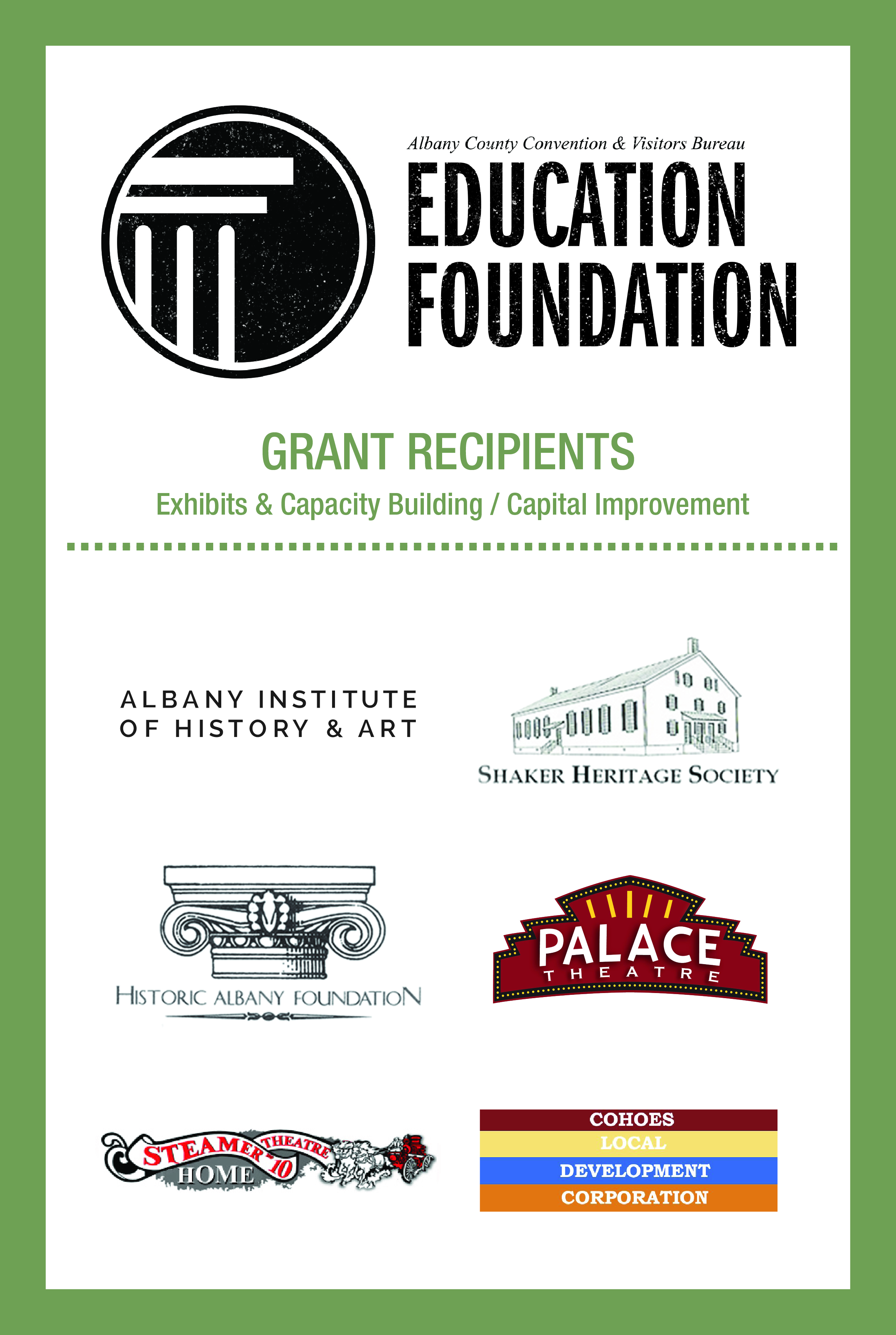 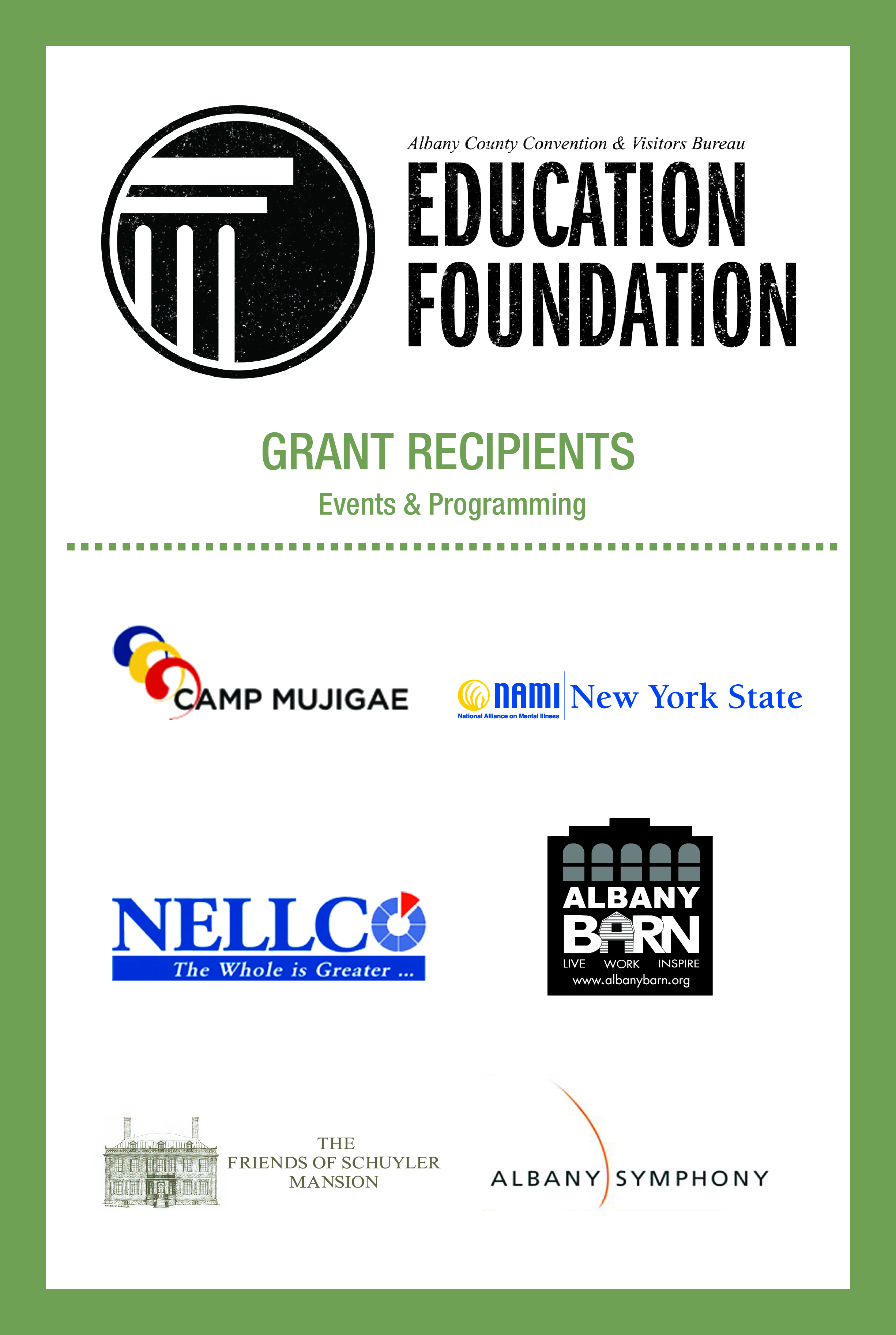 The fund, which is managed by the Community Foundation for the Greater Capital Region (CFGCR), supports programs that aid in building and sustaining Albany County tourism destinations, attractions, events, and other tourism-related activities. The grants encourage collaboration between nonprofit organizations, community groups, and hospitality businesses to further extend the economic impact of tourism and business.

“Tourism, including meetings and conventions, in our region ensures economic success, and these organizations understand what it takes to keep people coming back.” said Michele Vennard, President/CEO of the ACCVB, “It’s important to recognize these recipients who have all shown dedication to improving our hospitality culture and community.”

“The Community Foundation strengthens our region through philanthropy. We do this in collaboration with donors and partners like the Albany County Convention and Visitors Bureau who share our vision for community transformation. ACCVB’s Hospitality Fund grants are more than a source of funding for local nonprofit organizations—they are a perfect example of how generosity can be combined with ingenuity to produce real, measurable impact that benefits us all,” said Karen Bilowith, President and CEO, the Community Foundation for the Greater Capital Region. “Though this investment is targeted toward Albany County, the entire Capital Region will benefit from ACCVB’s generosity and leadership.”

The grants, ranging from $1,000 – $5,000, were approved by the ACCVB’s Board of Directors and were funded through the earned income of the Bureau. This is the third time in two years that non-profit organizations within Albany County have been awarded grants from the Foundation.

The 2014 Grant Recipients Are:

The purpose of Camp Mujigae is to bring Korean-born adopted children and their families together through an annual three day overnight summer camp to experience Korean culture.  Grant funds will allow the Camp to provide small additions to Camp to enrich the experience for campers and their families. This past year, Camp families with children attending Camp stayed at the Holiday Inn Express on Western Avenue.  In addition, Camp arranges overnight stays at the Hilton Garden Inn for the SIWA university students upon immediate arrival from Korea.

Grant funds will be used to fund transportation for the attendees of the 2015 Annual U.S. Meeting of the International Coalition of Library Consortia (ICOLC) April 26, 2015 through April 29, 2015.  The ICOLC meeting will draw an audience of 120-150 consortium leaders from around the world to the Desmond Hotel and Conference Center. The grant will enhance transportation bringing attendees to and from the Desmond Hotel and all that Albany has to offer including Wolf Road, downtown, and outlying locations, thereby enhancing the conference experience.

From April to July 2015 AIHA will present “Triple Play,” and grant funds will be used to supplement the marketing program associated with the exhibitions.  The major exhibition, Baseball in America (sponsored by Bank of America) is a nationally important collection of baseball memorabilia and material.  AIHA will curate two exhibitions to complement the nationally based exhibition, “The History of Baseball in the Capital Region” and “Club House.”  AIHA will work with ACCVB on a direct mailings.  It is anticipated that over 100 hotel stays will be generated by this exhibition.

Grant funds will be used to revitalize the Cohoes Visitors and Information Center at the beginning of the historic Erie Canal to attract national and international visitors, to provide a venue of activities for Capital District visitors, to provide informational resources to residents, and to provide a showcase for business opportunities in Cohoes. The attraction, programs, and activities, from bike to water travel will attract many daily as well as overnight stays.

Quiet Revolutionaries opened November 15, 2014 at the New York State Museum and will remain on view until March 6, 2016.  The exhibition focuses on the Capital Region as the birthplace of the Shaker movement in America, and the 700,000 square foot exhibition will feature hundreds of objects, documents and multimedia elements that illuminate the lives of Shakers in their three earliest villages–Albany, Mount Lebanon and Hancock.  Grant funds will be used to continue to market this first collaborative exhibition ever mounted at the New York State Museum.  Funds will be used specifically to purchase advertising space.

Grant funds will be used to offset the expenses of marketing the first season of the 2014-2015 concert series from December 2014 to March 2015.  The concert series features regional artists that may not typically frequent the Albany market–attracting a broader regional fan base.   It is estimated that each show in the concert series will generate between 10 and 12 overnight hotel stays.

Grant funds will be used to support the ASO subscription concerts taking place in Albany during the 2014-2015 Season.  The Symphony will perform four subscription concerts, three additional family concerts and a Christmas concert this season at the historic Palace Theatre in downtown Albany.  The subscription series in particular attracts a significant audience from across the Capital Region, surrounding counties and the wider tri-state area.  Requested funds will be used to support the Symphony’s marketing efforts to promote its Albany concerts to areas outside of the Capital Region.

Friends of Schuyler Mansion $2,700: Schuyler Splendor:  The Making of an 18th Century Home of Good Taste

Grant funds will be used to support our program, Schuyler Splendor:  The Making of an 18th Century Home of Good Taste.  The program will consist of five illustrated talks to be presented from February – June 2015.  Following the scholars sharing their expertise, the participants will travel to the Albany Institute of History and Art and/or Historic Cherry Hill in order to examine local examples of the material culture discussed in the talk.  This educational program will raise awareness of the Schuyler Mansion projects, interest and knowledge in the material culture of the 18th century and give participants a rare peek into the collections of Historic Cherry Hill and the Albany Institute of History and Art.

Historic Albany was recently awarded a grant through the Hudson River Valley Greenway to develop and launch a mobile phone app of historic walking tours throughout Albany’s historic neighborhoods, streetscapes and sites.  Foundation funds will be used to help implement this app.  The app will begin with one tour for the 2015 tour season and increase yearly to have a library of 30+ tours.  With the inauguration of a new mayor, HAF has been tasked with developing a plan to promote and increase Albany’s heritage tourism visibility and programming.

In 2014, the Palace engaged a team of consultants to help with the preliminary steps in revising a strategic plan for the theatre.  One theme that continuously came out in each focus group that was held was “the Palace Theatre should have fewer dark nights.”  Grant funds will be used to help to offer more community events in the 2014-2015 season, to engage more companies to hold retreats and expos at the venue and to add additional programming.  Last year, hotel partners recorded over 1,250 total overnight stays that could be directly attributed to events at the Palace Theatre.  This year is already on track to dramatically increase that figure.

Steamer 10 is initiating a Shakespeare program in Lincoln Park in 2015. Grant funds will be used to supplement technology needs that will allow stage crew and performers to work entirely with an in-house sound system.

In addition, the Albany Police Athletic League was awarded with a donation to further promote Capital Holiday Lights in the Park on the Albany.org website, assuring approximately 10,000 views during the run of the program.